Important things not on my resume: Can cook a meal for 40 without breaking a sweat.

This is the sorts of things that should be on your resume or in a job interview and does not.

Can you cook a meal for 40 without breaking a sweat?

This ability is not something that many people can boast of.  Yet it is something I have done from years of family and friends coming for holiday dinners.   Which holidays... well the various Jewish ones, of course.  The Jewish religion has many, many, many holidays. We are not satisfied with seeing family a couple of times a year while you try to keep interaction to a minimum.  We are up in each other stuff.  If you actually gathered for all Jewish holidays you might as well live in a compound surrounded by each other's tents.

This breaking of bread together solidifies the sense of community and perpetuates customs.   Customs evolve in a communal way that evolves the religion.  Any who.... The point is I can cook up a storm for a bunch of folks, and I mean a bunch of folks, without too much trouble.  Traditional dishes, vegetarian options, meats of all kinds.  To go with the Jewish holidays I can do traditional items for Purim, Passover, Rosh Ha Shana, etc.

If you had put on your resume, the number of people you can cook for, it would tell a lot about a person.  Skills may include ability to multitask, think on their feet, be creative, be organized, prepare for a project, juggle obstacles and risks, provide customer service, understand your target market, budget resources, and the ability to stay calm under pressure.  Who does not want these skills in a manager, co-worker or worker bee?

From a young age, I enjoyed cooking.   I dated an Italian guy for 7 years, and boy could his grandmother cook. She was the head chef at an all-boys school in Toronto called Upper Canada College.  She could make tomatoes sing and meat make you mouth water.  Even years after I moved to Missouri I would fly home with an apron and a set of knives in my suitcase to cook for the latest holiday.

So here we are a few days away from Passover.  I am still planning the final guest list.  The first sedar is on Friday night, a work day, so it will be a little more challenging to get it all done.  Yet, I have full confidence I will make an incredible meal and no one will go home without a full belly and a great sense of their own celebration of the holiday of freedom.
Posted by disgruntedfeminist at 4:59 PM No comments:

Email ThisBlogThis!Share to TwitterShare to FacebookShare to Pinterest
Labels: jewish cooking, Passover, things that should be on your resume 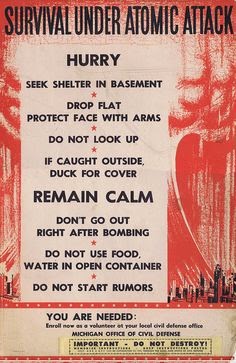 Sometimes when things happen you have a choice of how to react.  You can play or not play.  You can let things happen or your can be pro-active.  You can say, I told you so, or you can fix the problem before the consequences come falling down on your head, like so many snowflakes in Boston this winter.

Sometimes when things happen you don't have a choice.  You  must play.  You must react and be pro-active.  You must get involved.  You can't wait for, 'I told you so', because you may not have anyone to tell it to.

That is the situation that Benjamin Netanyahu and the State of Israel find themselves in, visa vi Iran's nuclear aspirations.   Today Benjamin Netanyahu addressed the American Congress upon their invitation.  The topic was the deal with Iran being negotiated.

I grew up on the time period of Atomic Bomb Drills. We were instructed to get under our desks to protect us from fall out. It was a time when the cold war was in full swing.  My dad had this great poster in his office that showed the drill procedure for an Atomic Bomb and the last step said 'to kiss your ass good-bye.'

I witnessed the end of those tensions through the fall of the Berlin Wall.  I backpacked around Europe in the Early 90's when people were staying in East Germany squatting in abandoned buildings. At the same time, Russian Immigrants were swarming into Israel on mass looking for freedom and a new life. With the end of those tensions went the fear of a world on the brink of destruction.  Bob Marley's lyrics comes to mind "Don't worry about atomic energy, because none of them can stop a the time."

Now we are watching a new arms race.  The contestant has the sworn goal of destroying the State of Israel, the Jewish Race, along with western views and values.  Hmmmm.   This country also funds, facilitates and equips most of the world terror organizations, oppresses it's own people and oppresses women. This nation that has spent the last years, since Iraq was removed from it's cross hairs,  building it's own power.  It has done so by all means possible, without care of international pressure or scrutiny.

So this leads us to March 3rds speech. The Prime Minister of Israel came to Congress and laid it on the line.  He nailed it with a fantastic speech.  This man has done fantastic things for Israel's PR and world image.  People may not like him but they have to respect, in the true sense of the word.  He has done the job and has not backed down. He has shown strength in the face of crazy.  He has been strong, eloquent, and poised.  He even intimated that if the world will not act in the face of Iran Israel will.  This should not allow or excuse the world's complacence.

On top of all this mounting evidence, Netanyahu is right... just straight-up right.  He knows of what he speaks.  He is not hiding behind politics.  Frankly, he has everything to lose, and I am not referring to his election prospects.  I am talking about the fact that Israel would be the first target.  The Target will not be a replica of an American war ship if Iran gets to the point of testing their atomic strength.  The target will be a nation full of strong survivors, Arabs, Jews and Christians. The target will be a holy land sacred to many and beautiful to behold.

The problem is, that no iron dome will protect us all from radiation.  When a nation does not care if they poison the very water and land that they live upon, the danger is real to us all.  Their goal outweighs the means.  The call for destruction is sung from the pulpit, in the newspapers, on their twitter pages and to the face of their people.

Posted by disgruntedfeminist at 5:44 AM No comments: