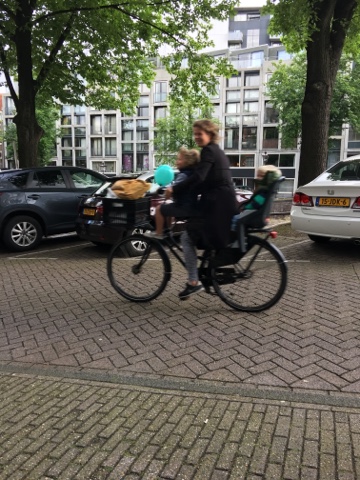 Welcome to my summer holiday.   This vacation will hopefully bring about many blog posts.  This is the first of them. I have been planning this trip for years.  We are heading to Amsterdam, then Israel and then Ireland.  By we, I mean my son Jordan, 13, my son Joel, 9 and myself. You will meet the rest of the gang as we go country to country.

So we started in Amsterdam.  Well it was not quite that easy. Really the packing had been going on for days. The running around town, gathering stuff and making arrangements had gone on for longer than that.  I had finally finished everything on Sunday night and went upstairs for a final check.  I then slipped on a kids toy and went down like a ton of bricks.  I hyper-extended my knee forward and to the side.   The pain was blinding.  Joel as bending beside me saying in his cute little voice "Are you OK Mommy,"  I tried to be brave and made it down stairs only to start crying when I saw my husband.  His back was out and he had been icing it.   I told him about the fall and he started sharing the ice pack and swiftly got me some single malt.   I iced my knee, off and on all evening, and tossed around the idea of going to emergency.  It was freaked out.  Yet I knew that I had to either cancel or go on as is.   There was no way I was going to cancel this trip. 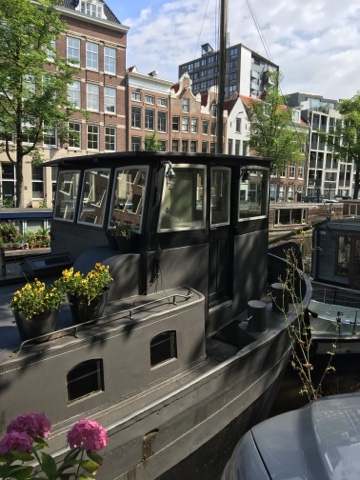 So I got up extra early the next morning and did the American thing.  I got a knee brace and a cane and went on with my day.  I strapped on the brace and figured if it didnt not kill me... We got on our shuttle bus to the airport at 9:00.  It was a two hour drive to St. Louis Airport.  We got there and had 2.5 hours to wait for the plane.  It was hard to walk and I toyed with the idea of taking a wheel chair to the gate.  Yet, I figured what was the point of that.  I was going to not only have to walk around airports all day I was about to head out on the four week trip I had been dreaming about for at least 10 years.

The kids were so excited.  We took a flight to Chicago, had a 4.5 hours top over, thanks to a delayed flight.  Then we flew to Amsterdam on the red-eye, over night flight.  Jordan had been stressing about beating jet lag and was determined to sleep on the plane.  The kids were doing OK until about two hours into the long flight when Joel spilled his tomato juice on Jordan as Jordan was trying to sleep.  I had to get between then to stop the war.   I switched seats with Joel to keep the peace.  My knee was sore and as you know there is not an inch to move in those seats so I just used mind over matter and some Tylenol threes to make it through the flight. 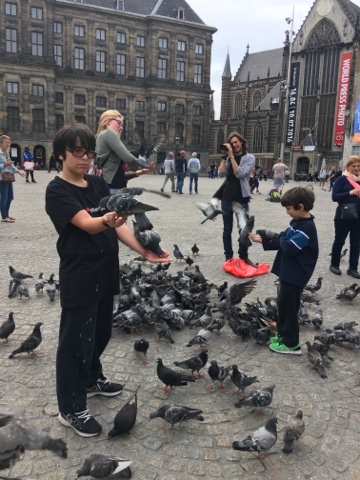 We arrived in Amsterdam after some rather limited plane sleep and were just over the moon with excitement.   We had rented a barge through AirBnB months before and couldn't wait to see it.  We got there and they met us with the keys.  The boys were so excited and spent a couple of hours running around and getting used to 'their'ship.  What a wonderful way for them to get their first taste with European accommodations.  The barge was fantastic, three bedrooms, full kitchen, living space and a nice big bathroom, never mind my private deck to hang on.    What a great thing? Love Airbnb.


We spent the afternoon wander around Amsterdam checking out the sites, eating fries and getting our passes for the next days activities.  We purchased I Am Amsterdam passes for 48 hours of entrance into almost any attractions and unlimited transit.  We planned to launch the passes the next day.  The kids were astounded by the sites.  I showed them some of the sites I knew about and at night we went back to our barge for a good nights sleep.   We deserved it.  We walked about 9 miles that day including the airport. 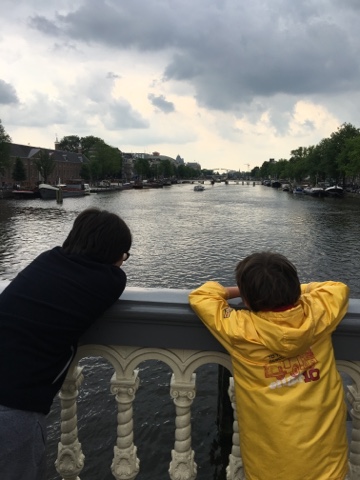 By the end of day one I counted myself one heck of a mother.  I was playing through the pain and showing my kids the world.  What a buzz?  I was definitely worried about the knee but frankly I did not let it stop my roll.   The next morning after a about 9 hours of sleep I got up feeling excited and refreshed.  We had successfully managed the time change.

Stay tuned to my next post as the story continues.
Posted by disgruntedfeminist at 3:22 PM No comments: