From Netanya AirBnB to 107f in Eilat 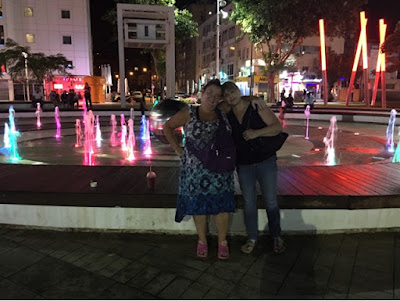 The next stage of this trip centered around our AirBnB base in Netanya.  We had rented a wonderful condo in Netanya for the week we also rented a car to get around.  Combine this with Google maps and we were good to go.

My sister Diane, her Kids and My brother Daniel and his Wife Kelly had all left to return to Canada.  This left my folks and me and the boys for 7 more days.  We drove to Netanya and checked into our condo.

The first thing I noticed about driving in Israel was that Google maps was my friend.  I plugged my phone into the car and it told me what to do.  I was not too proud to follow these direction.   Israeli drivers are very aggressive and I did not have a clue where I was going.  So with a little help from my little friend we made it all over the country during that week.  Also Israel is full of roundabouts.  They have replaced many lights with roundabouts and it is much smoother to get around. 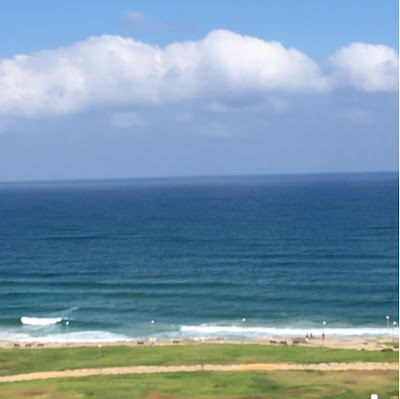 We did a substantial grocery shopping and ate out of the house for the first time in weeks. It was nice to have a base and this condo was wonderful.   I had my fears about using Airbnb but frankly it was exactly what we needed. The condo was clean, huge and beautiful. It was across the street from the beach.  It had a beach view looking west for the most beautiful sunsets.

The kitchen was huge and well equipped. It was kosher so that was a little bit of a challenge. I grew up with a kosher kitchen when I was young and have had many friends with kosher houses.  So I knew what to do.  Being kosher in a kitchen I was cooking in was a constant reminder of where we were. 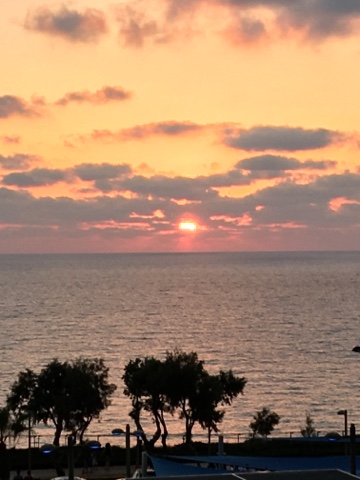 The area had a lot of religious French Jews which really brought home an issue that was continuing to show it's face during out trip.  The newest immigration to Israel was from France.  Over the years Israel has absorbed many cultures.  It is a mesh of Jews from all over the world that have become Israel.

When I was in Israel 21 years ago the immigration was from Russia.  The Ulplan, language program, that I did was about 50% Russian immigrants trying to learn the language to survive in Israel.  Now the Russians were indistinguishable from the rest of the populations.  The kids had all blended and everyone was dark haired with the occasional red head to blond.

The new folks were all French.  They were more religious then average and tended to keep their language.  They had money are were settling in cities like Netanya.  They were leaving the tension for Jews in Europe, and were entering into Israel with confidence.    France had been a huge hot bed of antisemitism for too long.  Israel welcomed these people with open arms and supported for their transition.

Anyway so we spent our days doing things we still wanted to do.  We went to Jerusalem and saw the Chagall Windows, spent more time in the old city and Joel and Sabba went to the Bloomberg Science Museum. 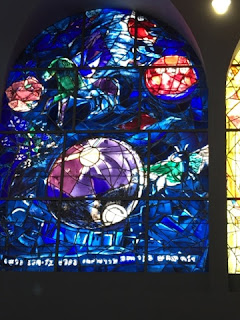 We spent a day in a water park so over populated that we thought we were all going to have anxiety attacks.  The combination of humanity was unbelievable.   The Jews with huge school and camp groups of kids out of control, the Arab families that came with their own bbq's and boom boxes and smaller family groups all over the place was tempered by teen age groups sizing each other up and young couples making out at will.  We stuck it out and the kids had a good time.

My boys and I did a short trip back south to Eilat.  I desperately wanted to take the boys there to show them the Red Sea and the Negev Mountains.   I remembered my days of going across to Egypt and staying in the little Bedouin town of Dahab.   I spent months on the Red Sea taking it in and enjoying living in an Arabian world.  One highlight was always snorkeling along the Red Sea coral reefs. 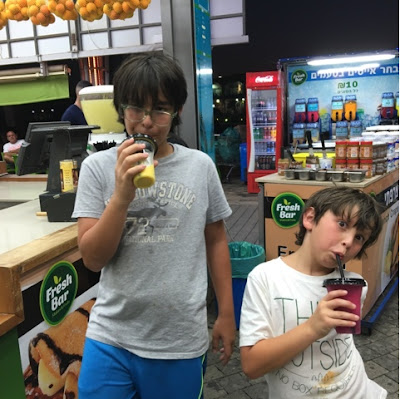 Against everyone's warnings of heat and long drives I couldn't help it but go down and show my kids this amazing place.  We drove down one day taking 5 hours to arrive in Eilat.  We skirted the southern part of the Dead Sea in our drive getting to see that magnificent area once again.   We listened to our Star Wars audio book and enjoyed the views.   My kids were used to long drives and this hardly qualifies as a long one yet it took us through many geographic regions and amazing views.

Eilat had changed a lot in 21 years.  The area that we stayed in was beside the bus station in old Eilat.  It was near the hostels I used to stay in.  Certainly not the caliber of hotels my Father arranged, but it was fine for our needs.  We had a small room with three small beds.  The kids got to experience an Israel bathroom the way they was back in the day.  The shower was in the same room as the toilet with no separation but a shower curtain.  There was a squeegee for any clean up needs.

The heat in Eliat was amazing.  We hardly wanted to eat and drank fruit smoothies everywhere we went.  It was hot, but a dry heat.  We had air conditioning in the car and hotel.  Otherwise we drank a lot of water and dove into the experience.

New Eliat, or the area around the marina, was much more developed. There used to be a few hotels down there, now it looked more like Vegas, with big theme hotels along the water with pedestrian ways and lots of cafe's and shops.   We went down there at night to walk around as the temperatures dropped to 99'f with a lovely wind that made it a wonderful experience. 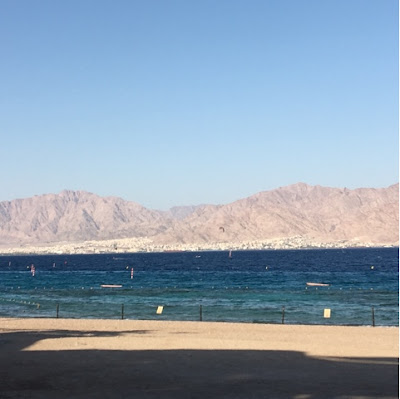 We spent the afternoon, which got up to 107'f, going to the Nature Preserve Reef.  We spent four hours snorkeling around in this magical place. There was a huge reef and they had two long decks built that you could take out to the outer side of the reef.  There you could jump into the water and check out this wonder land of thousands of fish, coral and other creatures.

Joel was the first to call it quits as the salt got too much for him.  I got him a slushy and left him on the beach, in the shade, while Jordan and I used every minute till the places closed to swim about.   The placed closed at 6 pm and I think we left at 5:59.

We got to see thousands of little silver fish swimming all around to long nose fish with scary looking mouths to parrot fish and all the cast of characters you see any any Disney movie set in the sea.   Sea cucumbers, coral swaying in the current, and sea urchins populated the multi color reefs.  This was the kind of experience you saw at aquariums in big cities but we were in the real thing.   I felt proud of my pluck to take the kids all the way there and show them this magical experience. 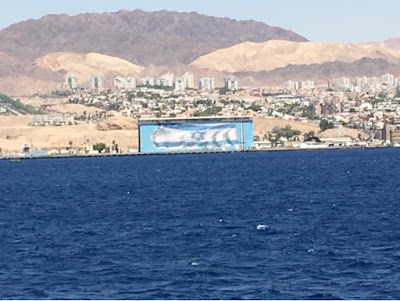 The next day we did a glass bottom boat tour of the bay.  We skirted the boarders of Jordan and Egypt.  This was the closest I went to taking my kids to these amazing Arabian worlds.  They wanted to go to Egypt to say they had been in African but I was not that crazy.  While I had spent about 3 months there back in the day, things had changed drastically and I was not about to put my kids into that world.   My world of Bedouin villages and dancing by the camp fire were long gone becoming high rise hotels, villas and a different political and religious world. 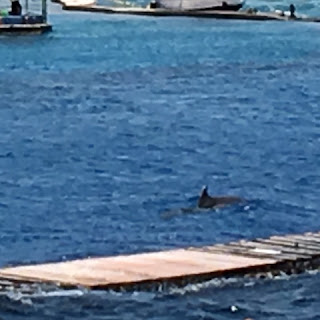 The cruse was fun but the glass bottom boat portion of the curse was a far cry from our swimming amount the fish the day before.  We saw dolphins playing and enjoyed the feeling of wind in our faces.  It was hot but it was a dry heat so you didn't feel like you were going to drop.

After the curse, we drove back to Netanya through the the same route saying goodbye to the Negev and the desert.  I wanted to take the kids by the other route seeing the Ramon Crater but it was Shabbat and I knew most things would be closed.  The route was through the mountains and would be more curvy. Joel had experienced some car sickness earlier in the trip and I did not want to re-visit that.  We were due in Netanya for Shabbat Dinner so we high tailed it home to our beach side condo on the Mediterranean Sea.

Posted by disgruntedfeminist at 10:49 PM No comments: